Gestational Diabetes Mellitus GDM or the diabetes developed during pregnancy is a common condition found during pregnancy. With changing lifestyle, food habits, changing social circumstances for women opting for later pregnancies the incidence of gestational diabetes is on the rise. Although this is a condition which is manageable with diet, exercise and medications, being undetected can pose a great danger to both the mother and the baby. In some cases the symptoms could be mild or go unnoticeable hence awareness and screening is most essential. 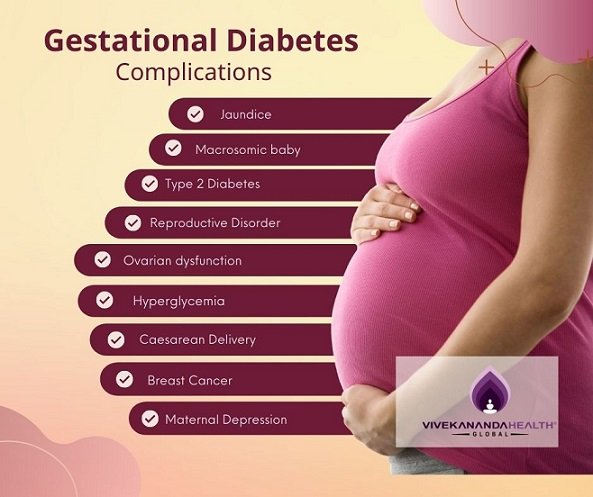 Pregnant women with abnormal glucose tolerance with the onset of pregnancy or first detected during the present pregnancy are said to be having gestational diabetes. This condition should mostly resolve with the end of pregnancy as the pregnancy hormones disappear from the body. In some cases it might continue to persist after the childbirth where further investigation may be required.

Gestational diabetes shows similar signs and symptoms as Type 2 diabetes such as:

Understanding the physiology of gestational diabetes

Unlike type 2 diabetes, gestational diabetes is largely driven by pregnancy hormones. To get a clear understanding, we should have a look at carbohydrate metabolism in pregnancy. The pregnancy hormones induce insulin resistance in the mother’s body which is responsible for postprandial hyperglycemia. The excess glucose enters placental circulation and ensures continuous supply of glucose to the foetus. The level of glucose would still be within normal limits in a healthy woman. But in some cases this threshold crosses to manifest as gestational diabetes. Overt Diabetes or pregestational diabetes: In some cases there is a pre-existing abnormal glucose level in the periconceptional period or before the onset of pregnancy. This is continued through the pregnancy and will be considered as overt diabetes. In case of overt diabetes the blood glucose levels are higher than the levels in gestational diabetes.

Since Indians come under a high risk ethnic group all pregnant women should be screened for GDM as early as possible. A fasting blood glucose level, postprandial glucose level and a 3 month average HbA1c is recommended.

Oral glucose tolerance test (OGTT) is a standard test employed for screening of gestational diabetes. 75 g of glucose is dissolved in 300 ml of water and ingested in about 10 minutes. If the 2 hour blood sugar value is more than 140 g/dl a diagnosis of GDM is made. OGTT has been made a mandatory test for all pregnant women in Health care centres.

Gestational diabetes can affect in various ways in both the baby as well as mother. It can not only cause complications in pregnancy but also leave a lasting impact on both the mother and the infant after the birth.

Conditions in the baby born with uncontrolled diabetes are

Conditions that may affect the mother are

Gestational diabetes can be managed well with diet, exercise, and blood glucose monitoring. Control of blood glucose level with the help of prescription medications. If the glucose is unstable it may be controlled with insulin. Monthly ultrasound should be performed to check for foetal condition. Induction of labour if the sugar levels are unstable for long so that there are not much further complications developed in the foetus.

Diet and exercise for gestational diabetes

Eating a healthy low sugar diet is the key to control blood sugar levels. Follow a meal plan which suits your personal preferences as well as caters the nutritional demands. Add vegetables and whole grains like brown rice, wheat, oats with natural sugar sources such as fruits and raisins. Limit the total fat and include a variety of foods to make sure to get protein, vitamins and minerals as well.

Exercising throughout the pregnancy helps not only curb the calories but also in management of backache and other common complaints. With proper guidance, practising yoga and pranayama will balance both body and the mind.

Developing healthy habits before and during pregnancy can reduce the risk of GDM to a large extent. Making healthy choices in food such as a low fat high fibre diet. Taking care of nutrition as well as calorie intake monitoring will keep the blood glucose in limits. Maintaining a good healthy weight before and in the starting of pregnancy and conscious effort to include light exercise and daily activity will definitely go a long way.

Management of GDM through Ayurveda

Ayurveda gives great emphasis to Garbha samskara or adopting preconceptional care and a thorough antenatal care which aims at producing healthy progeny. While describing Garbhadhana (conception) ayurveda advises certain body purifying measures or samshodhana karma (panchakarma) followed by special diet and lifestyle changes for the couple. This is to attain the best possible reproductive cells from the couple. Again after conception the mother is advised a monthly dietary regimen. In case of GDM a well thought out diet management with addition of Ayurvedic prescriptions to control the sugar levels can be included.

Ayurvedic concept of “Beeja shuddhi” having good quality seeds (sperm and ovum) and sowing the seed in a fertile soil(womb) is a very well established way to avoid such condition in pregnancy. The diet and regimen prescribed for pregnant women called garbhini paricharya also is an indication that the metabolic requirement of a pregnant woman should be dealt with care. Yoga is an essential component to ayurvedic treatment. Prenatal yoga under expert supervision significantly helps pregnant women with their sugar level control and also management of stress levels which is a key factor in metabolic disorders such as GDM. Asanas specific for antenatal care should be practised in a guided manner.

Pranayama or the breathing exercises are voluntary manipulation of breath movement which works on the parasympathetic nervous system. This causes a physiological response of low blood pressure and metabolic rate. Practising pranayama in the perinatal and antenatal period will reduce the risk factor of developing GDM or can help maintain a healthy glucose level in the body.